Photo: Inside the Mezquita, Mosque - Cathedral of Córdoba in Andalusia, Spain, on May 4, 2017. Muslim-friendly travel experts say Spain's Islamic heritage needs to be leveraged a lot more to attract Muslim visitors.

Spain wants to attract twice the number of high-spending Saudi visitors as part of its post-pandemic plans but a recent rise in Islamophobia could smear its Muslim-friendly image.

Around 90,000 Saudi travelers visited Spain in 2019, 21% more than over the previous year, Daniel Rosado, director of the Spanish Tourism Office for the Middle East, told Salaam Gateway.

The plan is to double this number once international flights resume in the kingdom from May 17, as recently announced by Saudi authorities.

Glenn Johnston, vice president of Middle East and Global Public Affairs at AVIAREPS told Salaam Gateway the plan is to do this over five years.

The global tourism marketing company was appointed by Spain Tourism in February this year as its joint marketing and public relations representative in Saudi Arabia. The decision to partner with AVIAREPS in the Kingdom reflects the importance of Saudi Arabia’s travel receipts for the European country.

Before COVID-19, Saudis made an average of 9.6 million leisure trips abroad each year, spending 80% of their entertainment budget whilst they were away, or around $5.6 billion per year, according to estimates by Saudi Arabia’s Ministry of Investment.

A big part of AviaReps’s focus will be to educate Saudi Arabia’s outbound tourism professionals about Spain so they can develop holiday itineraries for their clients. The company will also promote Spain to consumers and reach out to alliances and groups through digital marketing and partnerships.

But could a recent rise in Islamophobia in Spain potentially derail marketing efforts?

“In recent months we have seen a slight new surge in Islamophobic and xenophobic discourses from far-right activists and politicians, particularly in France, but also in Spain,” Dr. Barbara Ruiz-Bejarano, Director of International Relations at Córdoba-based Instituto Halal, told Salaam Gateway.

This year in France, the National Assembly in February voted to approve a controversial bill that neither mentions Muslims nor Islam but will affect them as President Macron pushes it forward in what he believes is a defense of the Republic’s fundamental value of secularism. The bill went to the upper house of Parliament at the end of March and this week, the Senate made an amendment that would render it illegal for girls under eighteen to wear the hijab in public. The amendment will go to the National Assembly for debate. If the bill is passed into law, the state will also have greater oversight of mosques, schools and religious organizations.

Next door in Spain, a right-wing political party has been increasingly vocal in its anti-Islam sentiments. But prior to this last year, there have been cases of Islamophobia. The Interior Ministry’s latest study on hate crimes does not mention Islam by name but reported 66 cases based on religious beliefs or practices in 2019 (down from 69 in 2018) and 596 cases based on racism and xenophobia (21% growth from 2018). Plataforma Ciudadana contra la Islamofobia reported 546 cases against Muslims in 2017, which was the year of the two terrorist attacks in Barcelona.

But tourists did not stop flocking to Spain post-2017. In fact, Spain in 2019 was the most popular EU destination for international tourists, with 299 million nights spent in tourist accommodation, or 22% of the EU total.

The country has also been pulling in more and more Muslim visitors, according to Fazal Bahardeen, CEO of Muslim-friendly travel market expert CrescentRating. Spain ranked ninth among non-Islamic countries on CrescentRating’s annual Global Muslim Travel Index 2019, on par with France and the Philippines. Bahardeen attributes this rise to the growing number of Muslim visitors as well as more Muslim-friendly services and facilities being offered, especially in the main cities.

It appears, then, that Muslim travelers will visit Spain regardless of cases of Islamophobia, but one analyst says more will be needed if authorities want to hit their goal of doubling the likes of Saudi visitors.

“I believe that some segments of Saudi travelers would travel to Spain regardless of whether or not it is Muslim-friendly, but if Spanish authorities are aiming to double the numbers, they would need to ramp up their efforts in providing Muslim-friendly services and facilities,” Reem El Shafaki, travel specialist and Partner at DinarStandard, told Salaam Gateway.

“In addition to providing some basic Muslim-friendly services, communicating a genuine welcoming environment of Muslim visitors, especially in light of France’s hijab ban, would go a long way.”

Spain has been strengthening its Muslim-friendly tourism ecosystem over many years but more needs to be done, according to Dr. Ruiz-Bejarano.

“Spain is not very developed in terms of Muslim-friendly tourism,” she said.

“More halal-certified hotels and restaurants are needed, as food and drink is the most basic need of Muslim travellers.”

Spain Tourism has at least consolidated a dedicated halal tourism website that includes a list of Muslim-friendly and halal restaurants. The portal currently lists 26 such eateries across seven cities.

On the ground, Instituto Halal has a certification scheme for Muslim-friendly tourism and professionals, and it is developing an ecosystem of halal tourism services and businesses that include hotels, restaurants, small gift shops, activities, and guides.

The pandemic in 2020 was a setback for the sector as the only two halal-certified establishments— Alanda Hotel in Marbella and Costa del Sol Hotel in Torremolinos—did not renew their certificates, said Dr. Ruiz-Bejarano. There was little reason to do so, considering there were no inbound international tourists.

The situation is similar for Mandarin Oriental in Barcelona that offered Muslim-friendly services and halal menus, and an establishment in Córdoba.

“Saudi tourists represented about 20% of our total guest numbers during the peak season. Also, the increase in our average room rate was mostly driven by the Saudi market as they were one of our top suite guests,” Khaldoun Hayajneh, general manager of Alanda Hotel Marbella told Salaam Gateway.

He said many Middle Easterners have houses in Marbella, which has encouraged local and foreign investors to open Muslim-friendly hotels, restaurants, and supermarkets.

“Definitely, there is a big halal tourism market in Spain and we’re making efforts to tap into it,” said Hayajneh.

This big market he refers to was set back by the pandemic but the good news is that the interest to serve the Muslim traveler seems to have grown, said Dr. Ruiz-Bejarano.

“We have done more seminars and training [on Muslim-friendly travel] than in the years before the pandemic. So, let’s hope they get ready to welcome Muslim tourists very soon,” she said.

Spain is set to re-open to international tourists in the summer with restrictions in place, such as compulsory negative-PCR tests or a vaccination passport, she added.

“Spain has traditionally promoted itself as a country for beach and sun. This is probably not the best attraction for Muslim travelers and many hotels and restaurants were not [equipped to meet] halal standards,” said Amina Zekri, CEO and founder of Barcelona-based Best Halal Trip.

Although several resorts in Spain’s southern region are Muslim-friendly—allowing modest swimwear and providing halal food on request—none of them offers separate swimming pools for men and women or dedicated ladies-only swimming hours, a point shared by guests on HalalBooking’s reviews.

“All hotels and resorts, when they are seriously looking at a particular market that they want to attract visitors from, the first thing they have to do is to look at their needs. Once borders open, I wouldn’t be surprised if a couple of resorts came up with different swimming times for men and women,” said AVIAREPS's Johnston.

But it’s not just about halal food and hotels. There’s still a lot more to it.

Both Zekri and Dr. Ruiz-Bajarano call for new destinations linked to the different segments of Muslim-friendly travel, such as in health and medical, adventure tourism, sports, and shopping.

The Instituto Halal official also joins Fazal Bahardeen in emphasizing Spain’s deep and rich Islamic heritage that spans from the 8th to the 17th century. In this regard, Dr. Ruiz-Bejarano suggests national authorities focus on a whole-country approach for Muslim-friendly tourism.

“Spain must have a national plan and start identifying and capitalizing other Islamic assets in its territory. For example, the mosque where Ibn Arabi used to pray,” she said, referring to the 13th century Muslim philosopher and renowned Sufi.

“Few people are aware of this information, but Murcia, where Ibn Arabi was born, could be the most important ziyarat to be re-discovered in Europe,” Dr. Ruiz-Bejarano said.

There are also benefits to packaging Spain with Portugal and Morocco, both of which are part of Al Andalus, or with Turkey for Umrah Plus packages, she added.

“We are now participating in a European Project called “Halal Markets”, led by Andalucía and Portugal, focused on strengthening halal tourism in these territories.”

At the end of the day, if Spain Tourism wants to pull in so many more Muslim visitors, such as from Saudi Arabia, it needs to promote the destination with a guarantee that there are businesses, whether big or small, prepared to cater to these customers, said Dr. Ruiz-Bejarano.

*An update was made in Para 4: AVIAREPS initially said the aim to double the number of Saudi visitors would be implemented over 12 months but has changed this to over five years. 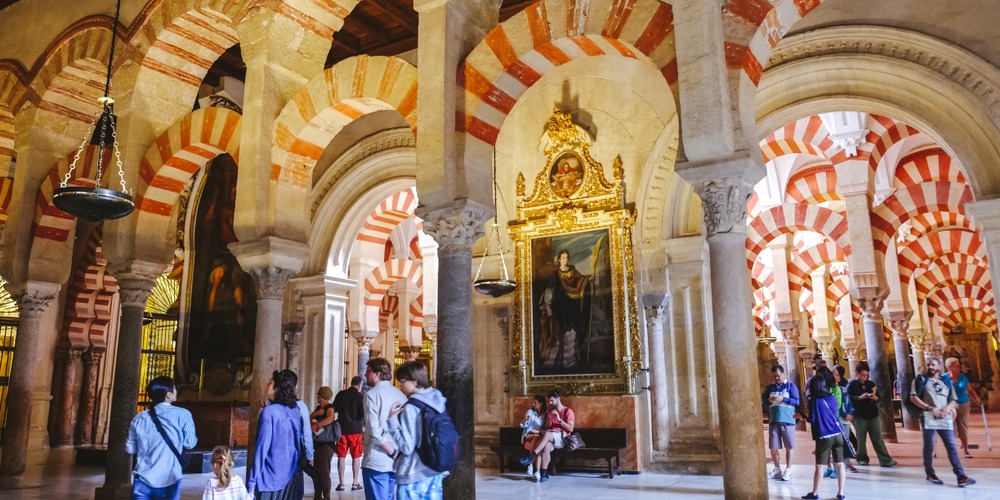 Spain must be ‘genuinely’ welcoming to attract more Muslim tourists amid recent rise in Islamophobia, say experts
Spain wants to attract twice the number of high-spending Saudi visitors as part of its post-pandemic plans but a recent rise in Islamophobia could smear its Muslim-friendly image. Around..
https://salaamgateway.com/story/amid-recent-rise-in-islamophobia-spain-must-be-genuinely-welcoming-to-attract-more-muslim-tourists-s