Arabic Calligraphy: Art of a nation and its historical development

The written word may be today’s communication tool, but art and pictures were the first language and, in the words of artist Paul Klee, “writing and painting are similar in essence”.

Beirut: Archaeological discoveries on cave walls is evidence that painting was man’s first written language; his drawings of animals and other shapes reflecting his daily life and challenges before he knew how to write.

Through time and with the support of painting, spoken languages evolved their alphabets to symbolise those sounds and man shifted from pictures to words. While Arabic did not develop from this historical process, its alphabets added a new dimension to writing via calligraphy. Through Arabic, calligraphy alphabets simultaneously became writing and painting tools.

Enhancing this dimension was the holy Quran when Muslims attempted to script beautifully to honour its holiness. Equally, Arabic calligraphy is widely shared across the Islam-Arab as the nations share a language and the writing’s beauty can be appreciated by anyone who reads or writes Arabic.

George Edward Manasseh, a Lebanese artist living in Tunisia, says Arabic calligraphy displays the elements considered as art and reflects the roots of the Arab identity and culture. Arab painting dates to the Abassi period (founded 750 AD) and had its own school in the Baghdad School of Painting.

The 13th century paintings of Yahya Al Wasiti belong to what is today classified as “art of clarification”.

As an art form, Arabic calligraphy has developed two writing styles, namely Kufi, named for the town of Kufa, and naskhi. The former evolved as the favourite epigraphic style and has various forms including the complicated floriated or plaited kufic predominantly seen on tombstones, buildings and utilities.

Square kufic is used for decorative purposes, while Ibn Muqlah (died 940) standardised the nskhi or naskh letter shapes and the style was later developed by other calligraphers including Ibn al Bawwab and Yaqut Al Mustasimi.

Arabic calligraphy as a new technique blurred the borders between calligraphy and painting and shifted Arabic alphabets from mere writing tools to drawing shapes. Consequently, it entered the modern fine arts and abstraction world where comments by Russian painter Wassily Kandinsky (1866-1944) like “the impact of the acute angle of a triangle on the circle produces an effect no less powerful than the finger of God touching the finger of Adam in Michelangelo” hold merit.

Arabic calligraphy entered a new level of beauty when calligraphers mastered the art of combining geometrical strictness with the most melodious rhythm of letters.

In following this technique, modern Tunisian calligrapher Nja Mahdaoui says he does not attempt to write something meaningful, but uses Arabic letters in isolated and combined forms “to do a fine work of art”.

A modern trend gives Arabic calligraphy the name hurufiyya to differentiate it from other arts forms. The name means the artworks that engage with the Arabic language – letters and texts – as a visual element or material for composing. Depending on these elements Manasseh says “Arabic calligraphy has all the elements to be part of the fine arts”.

Moufied Zaytouneh, retired professor at the Lebanese University, faculty of fine arts, emphasised the major role the spiritual element plays in Arabic calligraphy “where the letter catches the vibrations of the calligrapher’s soul to form its shape and reflects the beauty of his art”.

Enhancing its position in modern arts, Arabic calligraphy is considered the art of composition. Danish painter Asger Jorn (1914-1973) said: “There is writing in every image and an image in every writing”.

Manasseh says Arabic calligraphy has another element making it one of the greatest fine arts in that it reflects a nation’s history because “Arabic calligraphy is a history … that goes with the beauty of modern time and its innovations”.

This high level of beauty and modern technique moved Arabic calligraphy to be an international art, highly regarded among other fine arts, and attracted renowned artists to use Arabic calligraphy in their works. French painter Bernard Quentin (1923-2020) used Arabic letters in an architectural manner in some of his large artworks.

Arabic calligraphy has continued its development and spread into international markets and is now considered “a competitor to many art markets” while occupying the top position in the Arab world.

“It is a strong competitor whether regional or international, because it enters all fields from fashion to textiles, architecture, internal decoration and embellishment… When we combine all the elements, we notice its role in the art markets where the Islamic-Arabic nation exists and most people appreciate calligraphy because it represents part of their culture and beliefs,” Manasseh says.

Zaytouneh says the market for Arabic calligraphy is massive, particularly given the Islamic-Arab nation constitutes around 1.8 billion people or 24% of the world’s population.

“Most of them own calligraphic painting in their homes. Some take it as a painting to reflect their belief and bless their homes; others take it, if not Quran sourah, as a decorative painting, and if it was not too abstract, because it shows a wisdom or idiom they want to follow,” he says.

The variety of Arabic calligraphy reflects different styles where some calligraphers follow abstractionist schools; others are realistic and still more impressionists. These styles have their fingerprints in different art schools like Ibrahim El Salahi (born 1930) from Sudan; Sadequain Naqqash (1930-1987) from Pakistan and Shakir Hassan Al Said (1925-2004) from Iraq where artists have created a new aesthetic language of Arabic calligraphic figuration and abstraction.

Occupying this high rank position in regional and international markets opened the doors for Arabic calligraphy to own its place in famous and specialised exhibitions. Madiha Umar (1908-2005) pioneered abstract Arabic calligraphy painting from 1945 onwards and is considered the first Arab artist to research the relationship between Arabic calligraphy and western abstract artworks.

In 1949 she held one of the first exhibitions of modern Arabic calligraphy artworks at the Georgetown public library and today there are semi-permanent exhibitions of this art form at the International Research Centre for Islamic Culture and Art (IRCICA) in Istanbul and the specialised international exhibition in Dubai.

The writing style is predominantly used for official and non-official announcements like documents, page designs, wedding invitations, holy festival celebration cards and social media greetings. It has also entered the public art field where it invades city walls as graffiti – either as youthful expression or city beautification.

The script’s elegancy, beauty, culture and history also place it outside commercial markets. The United Nations Educational, Scientific and Cultural Organisation (UNESCO) has added Arabic calligraphy to its Intangible Cultural Heritage of Humanity list, describing it as “the artistic practice of handwriting Arabic script in a fluid manner to convey harmony, grace and beauty”.

It is an art with its own style to compose the elements of a nation and its development through history in an artistic painting. 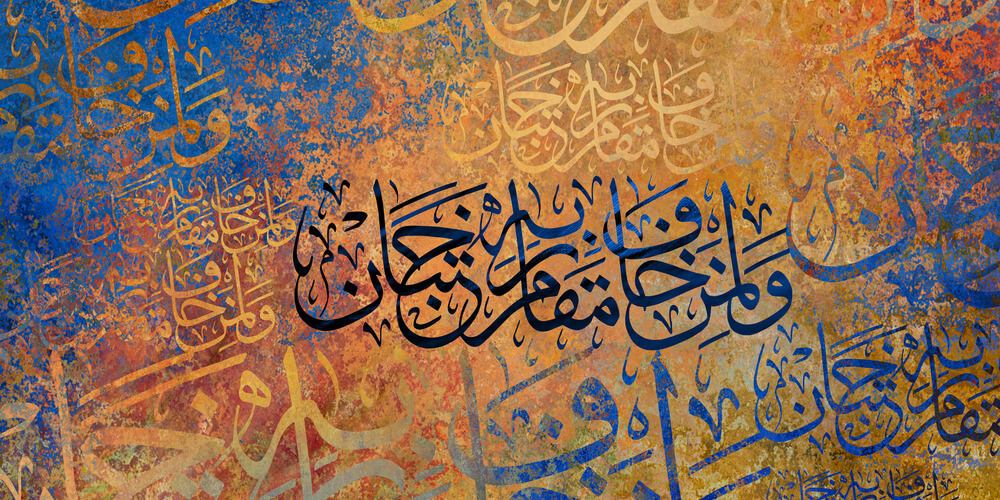 Arabic Calligraphy: Art of a nation and its historical development
The written word may be today’s communication tool, but art and pictures were the first language and, in the words of artist Paul Klee, “writing and painting are similar in essence&rdq..
https://salaamgateway.com/story/arabic-calligraphy-art-of-a-nation-and-its-historical-development