The first Ramadan to begin under COVID-19 lockdown in most countries has not stopped British Muslims from giving charity, providing some relief to fundraisers who were fearing the worst.

In late March, after the UK had gone into lockdown, the National Council for Voluntary Organisations had warned that the overall sector faced £4 billion in losses over the second quarter of 2020. This would represent a drop of almost a third in income for Britain’s 168,000 registered charities.

Of course, Muslim faith charities were bracing for the worst, not least because Ramadan was looming. As in other countries, Ramadan is the most crucial period for charity fundraising in the UK.

According to the Muslim Charities Forum, British Muslims form “the most charitable religious community in the UK” and last year, donors contributed over £130 million to British Muslim non-profits for campaigns in 40 countries.

“When this all started to unravel about six weeks ago, there was a concern we would lose a lot of charitable income. We were able to project what things might look like with this loss of income, and it was worrying,” Yasrab Shah, director of fundraising at Muslim Hands, told Salaam Gateway.

“Fundraising is the life-source of the charity. If you compare it to a tree, we are the roots and visible programs we carry out are the branches, so to speak. If the roots—fundraising—fail, the branches will dwindle.

“To say the least, we were very fearful over what could go wrong here. These are uncertain times.”

The uncertainty has since turned into hope for Nottingham-based Muslim Hands, an international aid agency with projects in the Middle East, Africa and Asia, as well as in Britain. As things stand, donations have increased by 20% this Ramadan over the same month last year.

It has been fortunate for the charity that its approach to fundraising was not more vulnerable in the face of a national lockdown. Other good causes rely heavily on their charity shops and fundraising events for their income, whereas Muslim Hands appeals more directly to donors.

“A lot of our donors are people who are self-employed, driving taxis or owning takeaways. These are people who have been directly affected by movement restrictions and seen a loss of income,” said Shah.

“But to see they are giving more money than ever to charity is a testament to their faith.”

Instead of furloughing its employees, Muslim Hands has been able to merge its events staff and volunteers with its contact centre team. The extra funding is being spent on more project work.

This includes new, coronavirus-inspired initiatives like a helpline to assist with advice for Muslim burials during the epidemic and supplying funeral societies with personal protective equipment. It has also helped increase the capacity of major charity Age UK’s call centre in Nottingham to help older people who are alone in lockdown.

“There is a very strong Islamic tradition of giving charity to divert calamity. We’re absolutely seeing that in play now, and that prediction of loss of income: we are seeing the opposite,” said Shah.

British people are also experiencing for themselves what it is like to live amid food shortages and under restrictions, giving them an idea of what Ramadan is like for many Muslims in other parts of the world even in normal times, continued Shah.

“Because we have literally felt this in the UK, I think it has triggered a natural response. People have been donating abroad, to Syria, Yemen, to the Rohingya, to Kashmir, not just to local charities. We have been seeing donations across the board.”

In Yorkshire, Zia Salik was preparing to spend the night taking donation calls during a live appeal broadcast on the Islam Channel when he spoke to Salaam Gateway.

The director of fundraising at Islamic Relief UK had been forced to scale down physical activities almost entirely from the usual 400 or so during the Ramadan period, and instead has focused on fundraising through digital and broadcast media.

Salik’s approach has been influenced by a combination of a larger online budget given over from the cancellation of expensive physical engagement events, and also the youthful profile of the British Muslim community.

“Dinners and gatherings have been very effective but they are expensive to put on. We have channelled the cost of these events into our online fundraising,” he said.

“What works in our favour is the demographic of the Muslim community in the UK. If you look at the 2011 census, there has been a boom in a digital-savvy and social-media connected Muslim community that’s mostly under the age of 50.”

Islamic Relief had been seeing offline engagement decline over the years in favour of online donations.

In its realigned approach to fundraising this year, the charity has been urging Muslims to donate sadaqah and zakat to its campaigns in Britain and overseas.

“We’ve been getting in touch with our donors and telling them about the projects we will be delivering this Ramadan and the people we will be supporting. The digital space is our focus and probably is with other charities too now,” said Salik.

“From a charity’s perspective, if people don’t have as much disposable cash to give, we expect a drop in donations. But so far, we don’t seem to have felt that drop yet.”

Though incomes have so far been constant, there remains some tense weeks ahead for the charity’s fundraising team this Ramadan. A big proportion of the month’s income tends to come during the last 10 days.

“When we see what happens then, it will be a better indication of how this Ramadan has performed in terms of fundraising,” said Salik, as his charity counted down to the start of its Islam Channel fundraising transmission.

Broadcasting since 2004 in the UK, the station regularly hosts nighttime appeals for charities during Ramadan. It recently launched the Islam Channel Giving app to make it easier for viewers to donate through their smartphones.

“We’ve always held these televised appeals whereby, large numbers are raised due to the reach Islam Channel has. There have been nights when over a million pounds have been raised,” said the broadcaster’s managing director, Mohamed Harrath.

The channel recently revealed the findings of a survey of the Muslim charities it supports, finding that they expect to raise an average of 40% of their annual income during Ramadan, though one is hoping to take in as much as 80% of its funding this month.

According to the survey, British Muslims donate £123 each in Ramadan, almost three times the average monthly UK donation to charity.

“The findings lead to key points: One is that Ramadan is a super-key period, with close to half of annual fundraising coming in one month on average,” said Harrath.

“The second is that some charities report up to 60% from offline fundraising. Even though we are all locked down, it still shows that charity bucket in the mosque is still needed.

“Even though people are locked down, traditional methods will always be important for fundraising.” 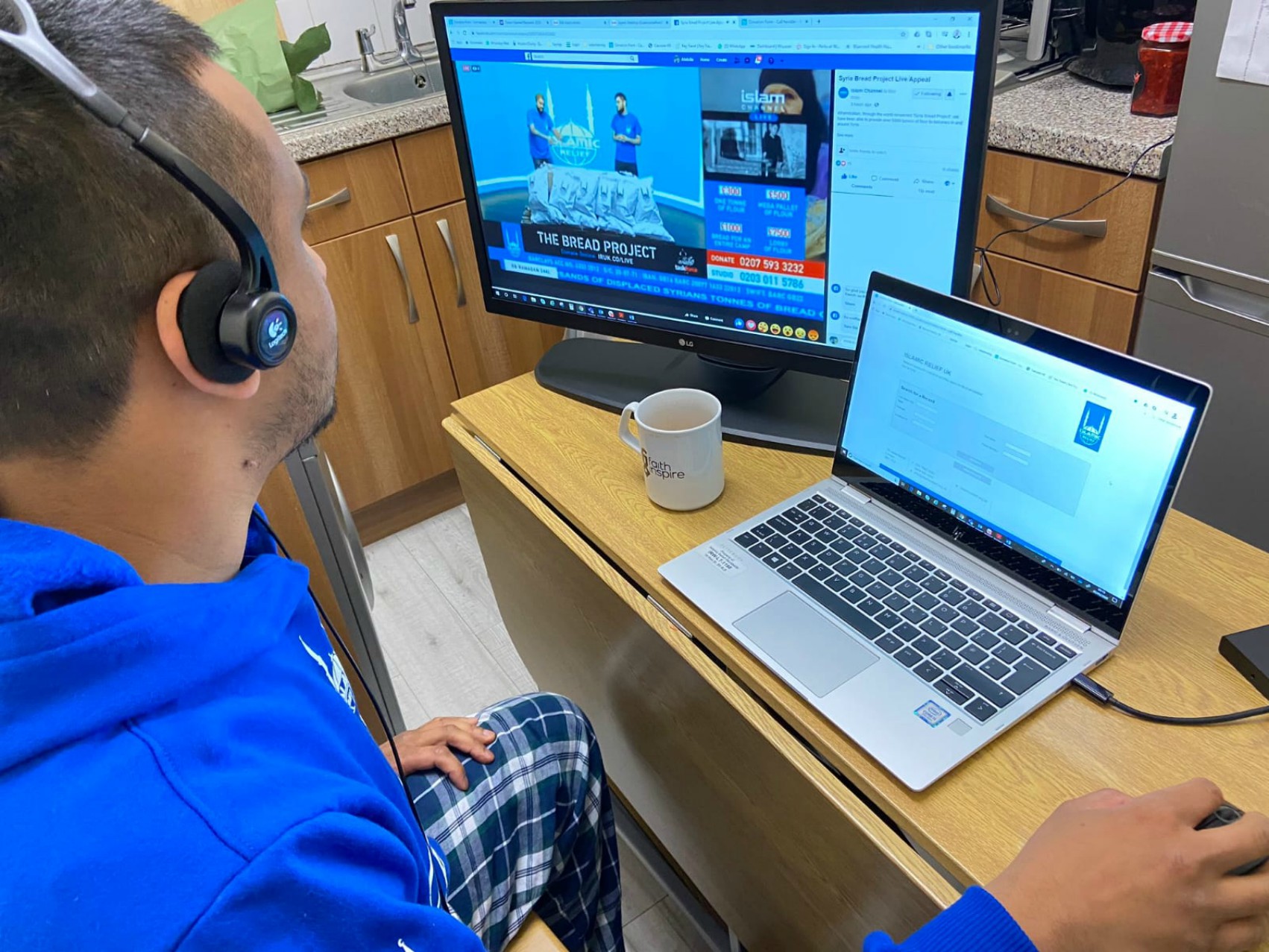 UK Muslim charities report unexpected level of donations amid Ramadan in COVID-19 crisis
The first Ramadan to begin under COVID-19 lockdown in most countries has not stopped British Muslims from giving charity, providing some relief to fundraisers who were fearing the worst. ..
https://salaamgateway.com/story/british-muslim-charities-report-unexpected-boost-in-donations-this-ramadan