Commentary: How much does the Islamic economy embrace gender diversity and inclusion?

In December 2016, Simply Sharia Human Capital (SSHC) produced the first industry report dedicated to the role of women in Islamic finance and the Islamic economy as finance professionals, entrepreneurs, scholars, educators and millennials. The report recognized and celebrated the many achievements and contributions women have made across the Islamic economy sectors and the professional landscape.

As a means of raising awareness of the vital contribution women make to Islamic finance and the Islamic economy sectors, the report galvanized the voices of women and men in showcasing their lived experiences and the need for improvement and change towards gender diversity, inclusion and representation.

So, in just over three years, how much improvement and change have the Islamic economy sectors embraced in gender diversity and inclusion? Where have we driven transformations and made strides towards better representation of women? And are we taking advantage of embracing the economic benefits of full gender parity, which in the GCC alone would add 32% to GDP or $830 billion into the economy by 2025?

In the last three years there have been positive changes in both the visibility of women in Islamic economy sectors and some Organization of Islamic Cooperation (OIC) countries taking measures to support and enable female entrepreneurship, work towards closing the gender gap and recognizing the importance and strength of women’s economic empowerment.

Female entrepreneurs have been fundamental to the growing success across Islamic economy sectors. Women from MENA, Sub-Saharan Africa, Europe, Asia and the U.S. are defying stereotypes, creating Muslim-friendly brands and building their own spaces in male-dominated sectors like technology.

If there is anything that rings true, it’s that women are doing it for themselves. And there is no place quite like the internet, which has given women the access to pursue their entrepreneurial journey.  Unshackled from some of the constraints of working in the corporate world, including cultural and societal barriers, safety, juggling family and costly transport - the tech world has served as a meritocratic playing field. So much so, that one in three start-ups in the ‘Arab World’ are founded or led by women. Further, Kuala Lumpur, Jakarta and Istanbul are included in the top 50 global cities to be able to attract and support women entrepreneurs, according to the Dell 2019 Women Entrepreneur Cities (WE Cities) Index.

A Report by Al Masah Capital Limited asserts that over 25% of new start-ups are founded by women in the GCC, managing $385 billion through small and medium enterprises (SMEs).

We have also seen a rise in women across the modest fashion sector with Turkey’s Lale Tuzan, co-founder at Modanisa, catering to women in 75 countries with an estimated company revenue between $120 million to $150 million. Female founders like Melanie Elturk, who went from civil rights lawyer to the owner and CEO of Haute Hijab, recognized the strong connection between sustainability, faith and the empowerment of Muslim women. Elturk secured $2.3 million in their latest funding round, while Ghizlan Guenez of UAE-based The Modist completed a $15 million funding round in 2018 led by Vaultier7, the UK’s first female-led specialist private equity fund focusing on beauty and  lifestyle and received investments from Farfetch and Annabel Investment Holding, the private equity company of Nicola Bulgari, Vice-chairman of jeweler Bulgari Group.

With Muslim expenditure on fashion expected to rise to $402 billion by 2024 we see a representative sector, where women are taking control of their own narrative and redefining their role in society as entrepreneurs, employers and influencers. Now more than ever is when we need to support a sector vital to and for women with global solutions, such as the initiatives proposed by Indonesia in its Islamic Economy Masterplan 2019-24 including developing talent, incubating fashion start-ups, increasing the number of entrepreneurs, collaborating with other halal value chain sectors, including Islamic finance, to access funding.

As women make their mark in entrepreneurship, the corporate world of Islamic finance and banking still lags behind in diversity and inclusion, especially across leadership level.

Invariably the cornerstone of the Islamic economy, Islamic finance is projected to reach $3.5 trillion by 2024. Yet this global powerhouse has been sluggish in in its approach to equal representation and participation of women in leadership.

The greatest inroads for representation and gender parity in Islamic finance has been made by Malaysia and Indonesia, where women are found as CEOs, board members, academics and Shariah scholars at regulatory bodies, Islamic banks and other Islamic financial institutions. These include women taking some of the highest offices in their respective countries.

In the other Islamic finance powerhouse region, we are yet to see parity for women at C-suite including CEO level in any of the banks, Islamic or conventional, in the Middle East. Two notable mentions are Abu Dhabi Islamic Bank Egypt’s CEO Nevine Loutfy (who passed away in 2016), and Rania Nashar, the first woman to be appointed as CEO at Samba Bank in Saudi Arabia in 2017.

With regards Shariah scholars, in 2011 the then AAOIFI Secretary-General, Mohamad Nedal Alchaar said there were no female scholars in the Middle East. To date there is very little evidence to say that has changed, with no official figures from Islamic financial institutions in the Middle East.

On boards, a 2016 study, by Shareholder Rights and The Euromena Funds, across 1,483 public companies in 13 countries in the MENA region found that only 17% had some female representation on their board. Pharmaceutical companies led with 29% having female directors, followed by 27% of education companies, and 24% of banking financial services.

No comprehensive study has been undertaken to determine the number of women on the boards of Islamic banks in the Middle East. Of the top ten Global Finance's 2019 ranking of the safest Islamic banks in the Gulf Cooperation Council (GCC) and from publicly-available records (website information) from the named institutions themselves, only Barwa Bank has one female representative on the board of directors.

Acknowledging the need for an increase in representation, the UAE passed legislation in 2012 making it compulsory for corporations and government agencies to include women on their boards. The goal is for 20% women’s representation on boards of directors by this year. By this time in 2021, we will be able to measure how effective this has been for Islamic banking and finance in the country.

I do not believe the issue of lack of leadership pipelines for women in Islamic finance is not important to people who work in the industry, but it is not given urgency.

I’m reminded of a conference I attended many years ago and an eminent Shariah scholar was asked about the lack of women in leadership positions in the industry. His reply was when the time will come, it will happen (I paraphrase).

As the old proverb goes: “Doing nothing is hard, you never know when you’re done.”

Inaction is not a powerful catalyst for change. No CEO in any institution would employ inertia as a strategy. In fact, the burden of solving gender inequity lies with CEOs and shareholders. If they are serious about female participation in the workplace at all levels, they must not only make it a strategic priority, but implement inclusive workplace polices, identify the barriers facing women in their own institutions, create clear pathways and pipelines for women toward leadership and engage a culture which fosters inclusion, innovation and best practices.

I would also say to any CEO of an Islamic bank or institution, next time you’re asked to sit on a panel of ‘Power CEOs’ and you don’t see a woman sitting next to you, remove yourself from that debate. Optics matter. Representation matters.

Gender inequity is not an issue just for the Islamic economy or OIC countries. It is a global plight. It will take 257 years to close the gender economic gap, according to The World Economic Forum – that is an increase of 55 years from the estimate in 2019.

But this issue acutely affects our economies, when nine out of the 10 least gender-equal countries in the World are OIC nations, according to data from the WEF Global Gender Gap Report 2020.

There are around 800 million Muslim women across the planet, of those, over 150 million are active economic and labor participants, earning close to $1 trillion.

According to Saadia Zahidi, the author of ‘Fifty Million Rising’ and Head of the Centre for the New Economy and Society at the World Economic Forum the “combined earnings [of] Muslim women would make them the world’s 16th richest country.”

Our prosperity, inclusion, wellbeing, security and progress is what will help shape and define the future trajectory of our countries. Representation and inclusion of women will only enrich the Islamic economy. 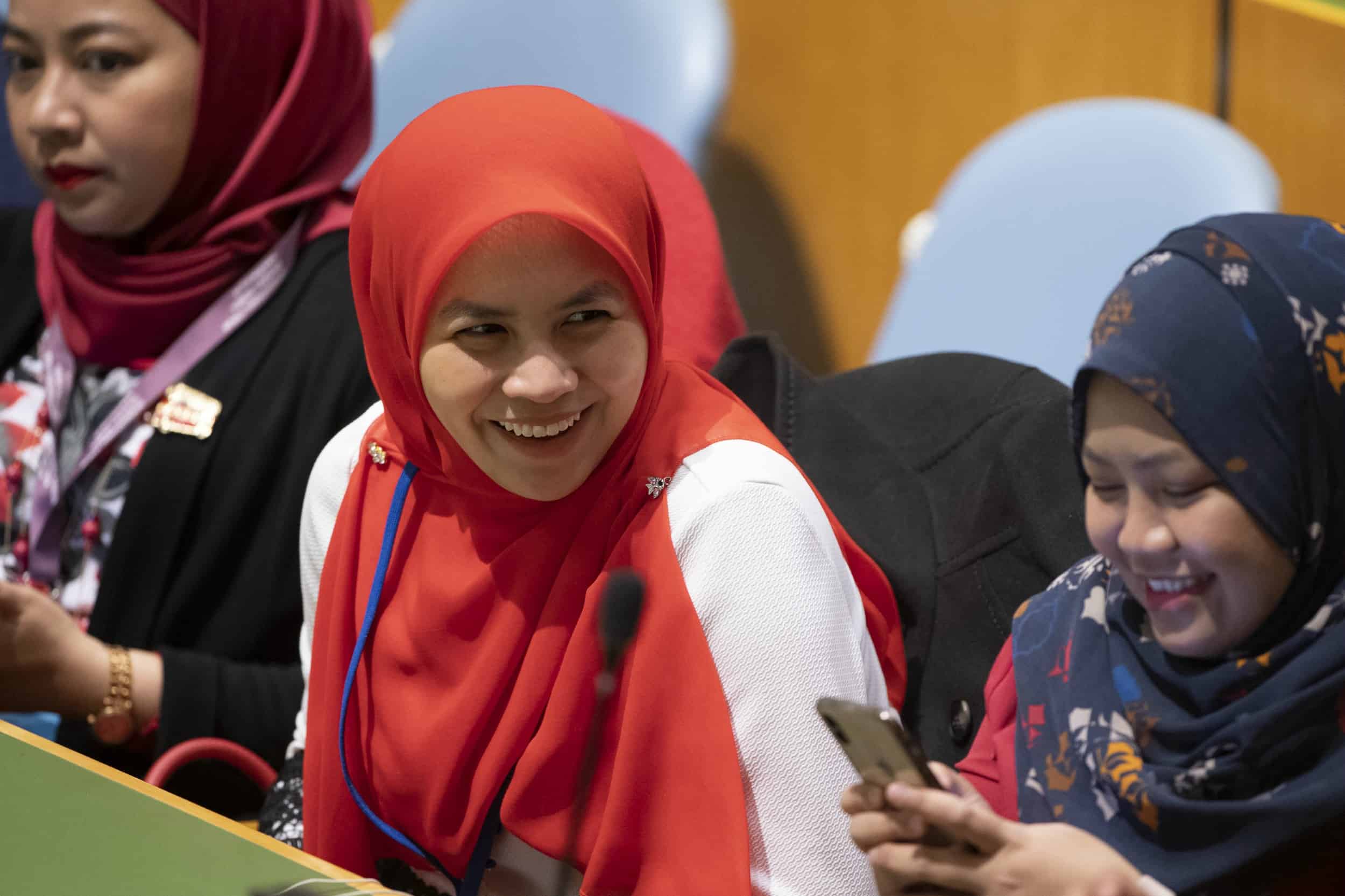