Muslim broadcasters and content producers are growing fast across Europe, North America, Asia and the Middle East, churning out an increasinly diverse amount of programing, including both local content as well as programing that appeals to international audiences.

The opening of the Dubai, United Arab Emirates (UAE) bureau of the Annahar Al Arabi digital news platform in January 2022 is one example of such cross-border growth, highlighting an appetite for regionally-relevant content in the Gulf region. This new office is expected to enhance the regional reach of the Lebanon-based media corporation, which offers diverse content covering political, economic, and social issues of interest to Arab audiences.

While there is no shortage of Western media outlets in the Gulf region, few of them cater to Arab audiences, providing an opening to regional Muslim-focused players. A recent survey of Saudi residents by Kearney Middle East and Africa found that 21% of respondents prefer quality Arabic content on TV and other media platforms over international content. To meet this need, 63% of respondents said they were willing to pay a premium.

The preference for local and regionally relevant content has given rise to channels such as OSN Woman, part of the UAE-based regional cable network OSN. Launched in March 2021, the pay TV channel offers content tailored for women in the Middle East and is available both on TV and the OSN streaming app. OSN currently offers more than 200 channels, but none cater exclusively to women, Rolla Karam, chief content officer at OSN said in an interview with Dubai’s Al Aan TV.

The new channel’s line-up is curated by an all-female programming team at OSN and features lifestyle, health, family and parenting topics. While the content is international, there are plans to release originals for the channel, according to Karam, who says she has been receiving pitches from female talents in the region.

Another new platform that caters to younger Arab audiences is the Majid Universe app. Launched by Abu Dhabi Media last October (2021), the app takes some of the region’s most popular animated characters into the digital age.

The Majid characters have been popularised over four decades via different formats, including an animated series, TV channel and monthly comic magazine. Users of the subscription-based app get access to an 800-plus hour library of content, TV shows, games and Majid magazines dating back to 1979 – some never broadcast before. The content includes Freej, a popular series which focuses on Emirati women and their lives in a neighbourhood of modern-day Dubai.

Similar outward looking developments have characterised the Muslim-focused media output of Malaysia, where Islamic video-on-demand and streaming platforms continue to focus on producing original content with partners in 2022. Streaming service Nurflix, for example, had over 40,000 subscribers by the end of 2021, despite the continuing challenges to produce original content during Malaysian COVID-19 pandemic restrictions. One success in the past year has been the acquisition of more than 500 episodes of “The Prophet,” an animated series with Islamic historical references produced by Egypt-based ATA Animation Studio in collaboration with Al-Azhar Asy-Sharif Islamic Research Academy, based in Cairo.

In 2022, Nurflix intends to complete the remainder of its first 12 episode original drama series, including “Sabili:Al,” “Light and Love” and “The Khadijahs.” It also plans to release more of its Turāth Islamic heritage series, such as “Risalah Tauhid” about “the oneness of God” and masterclass programmes such as “The Art of Silat,” focusing on an indigenous southeast Asian martial art. The company said it wants to acquire Islamic content from other providers, while increasing marketing efforts to generate revenue from paid subscriptions.

Nurflix CEO Syah Mohamed told Salaam Gateway: “2022 will be about growing content, targeted marketing, and close collaboration.” He added: “A partnership with Microsoft Azure will enable Nurflix to use artificial intelligence-based tracking to suggest recommendations, as well as build on our educational content with quizzes for upcoming interactive videos.” The company also plans to add smart TV, Android and Apple TV versions to its web and mobile apps, expand its subscription base, and attract international investors, he said.

There has also been progress at Malaysia-based animator Digital Durian, which has been selling its animated children’s series Omar & Hana to broadcasters in Malaysia, Indonesia, the UK and the Middle East or uploaded to YouTube. It is now also focusing on a sister business called Durioo, a tech start-up providing a subscription-based platform called Durioo+ for mobiles, tablets, Android boxes and smart TVs, offering its own animated Islamic content branded as Durioo Originals.

When reflecting on 2021, the CEO of Digital Durian and Durioo, Sinan Ismail said: “Finishing the year with over 7 million subscribers across our Omar & Hana YouTube channels is encouraging.” The animated series is made in English, Urdu, Arabic and other languages. With the UK and the US comprising 40% percent of the English YouTube channel viewership, “we are ready for a bigger mission that calls for a different model and more English content,” he said.

As a result, Durioo will begin launching Durioo+ in February 2022 with 11 Durioo Originals, such as Little Ammar, Mina Mila, Polytako, Zehni, and Bubu Lala. Durioo is preparing for a round of seed funding in March 2022, backed by American technology accelerator Y Combinator as well as investors from the UK, UAE, Bahrain, Australia and Malaysia,

The interplay between English and other Muslim majority language services can be seen in UK Muslim media outlets. Birmingham-based Takbeer TV is taking a twin-track approach, shifting towards online app formats with shorter programming slots and programmes with a longer shelf-life. Station manager Sultan Bilal told Salaam Gateway that the sector’s “eco system is changing” and that broadcasters are having to overhaul their content to segment it for more individualised viewing via apps, rather than targeting entire households via broadcast.

“The landscape is changing to video on demand – advertisers feel more comfortable there.” But Bilal admitted to feeling “wary” about the move to on-demand viewing, as his station’s programming was strictly child friendly for broadcast prior to 8pm, with adult-oriented viewing only after this watershed. Launched in 2010, Takbeer TV broadcasts almost entirely in Urdu and Hindi with just one programme a week in English. It caters mainly to the Pakistani communities in the UK, with some viewers in Pakistan, the Middle East and Africa –  68% of its programmes are based on religious content. But now all that is set to change with more English language programming and a move towards more lifestyle content, said Bilal, with a move to generate wider appeal in the online viewing community.

Bilal ruled out any political content due in part to high production costs, short term debate relevance and the risk having to deal with broadcast standards cases if issues genuinely affecting the UK’s Muslim communities were to be aired.

Bilal said the number of frivolous complaints increases to UK broadcast regulator OFCOM when political content is aired: “We’re so small, we can’t afford to get caught up in complaints where OFCOM have to get involved and investigations drag on for months. The divide in communities at the moment is such that a lot of people complain about political coverage of Muslim political issues.”

Instead, Takbeer TV is planning to focus more on animation, children’s programmes, religion and the work of mosques in communities. It is also working with the National Trust and the UK Heritage Trust Network to encourage British Muslim families to travel the UK and experience its rich cultural heritage.

One topic that will be central in Takbeer’s on-demand programming are series focusing on sustainability, he said. Given climate change is here to stay, such material would have a long shelf life, with its popularity with Muslim audiences solidified by Islam’s focus on the community.

The station’s first all-English channel is also in the pipeline. This will initially be a local channel based in Manchester and focusing on local lifestyle issues, with executives assessing its success before considering whether to expand the service nation-wide with UK-wide content.

Bilal told Salaam Gateway that his company has signed a content supply deal with major UK broadcaster Sky’s new Sky Glass video on-demand platform, with Takbeer focusing on content that is 10 minutes long or less to appeal to wider audiences. Having smaller items enables the company to regularly update its offerings and keep viewers interested.

Two years ago, Takbeer TV had 300 Facebook followers and now it has 84,000 through organic growth, it says. The company is also looking to expand revenue through its internet app-delivered services, which currently supply 16% of income with the goal of reaching 40% by the end of 2022, said Bilal.

The expansion of Muslim-focused programming can be witnessed in the USA. For instance, Muslim Network TV is boosting its news content to increase viewership. Imam Abdul Malik Mujahid is president of Sound Vision Foundation, a Chicago-based non-profit organisation that produces the channel. He said its executives are learning that “news is something which is grabbing more attention,” and network began producing its English-language Muslim News programme about six months ago. A separate programme is produced for its Canadian audience.

The increased concentration on news has led to consistent growth and more viewers, Mujahid told Salaam Gateway. He declined to give viewership numbers, but said the programming fills a need because there is no national Muslim newspaper in the USA. Mujahid also said the network is planning to offer more shows on science and technology, a comedy show and a new animated children’s series.

Muslim Network TV had a soft launch in North America in spring 2020. The English language channel is available by satellite and on Amazon Fire, Apple TV and Roku. It also streams live on YouTube, Facebook and on its website MuslimNetwork.tv.

Sound Vision Foundation has been producing Muslim-focused broadcast content since 1988. It features Muslim-focused content, including award-winning documentaries, which have been shown in 28 countries and 68 channels in the United States and Canada.

Another expanding Muslim-focused channel in the USA is Alchemiya. The subscription-based online portal features Islamic video content, including movies, entertainment series, documentaries and children's programmes. It says its focus is on culture not religion. Its newest programmes include “Unknown Mosques of Istanbul” and a documentary about Muslim girls taking up the sport of fencing. To commemorate Pakistan Day on March 23, Alchemiya is broadcasting “The White of the Pakistan Flag,” a documentary about the patriotism of Hindus, Sikhs and Christians living in the Muslim-majority country. Alchemiya was founded in 2015 by Ajmal Masroor and Navid Akhtar, who had previously worked for 20 years in the UK broadcasting industry. The platform initially collaborated with small investors and has expanded to currently features 600 to 700 pieces of content, according to Akhtar, Alchemiya’s CEO. Alchemiya increasingly finds its audience through social media advertising. It now has subscribers in about 40 countries, although most subscribers are currently in the USA and the UK and the content is mainly in English.

Read: ‘We want to be the Disney of the Muslim world’: Now seen in over 60 countries, Muslim Kids TV seeks funding for growth

Read: Where are the Islamic animated movies? 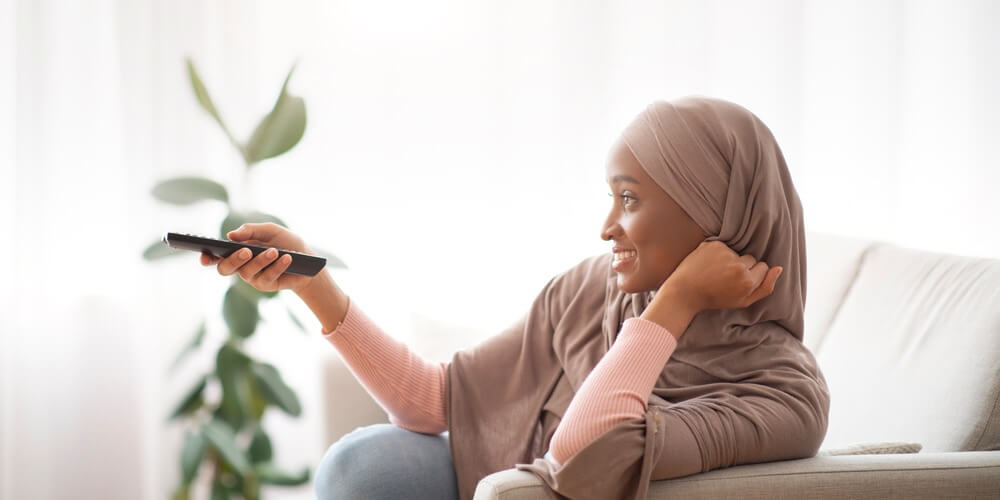 Muslim-focused media expands worldwide and across multiple platforms
Muslim broadcasters and content producers are growing fast across Europe, North America, Asia and the Middle East, churning out an increasinly diverse amount of programing, including bot..
https://salaamgateway.com/story/muslim-focused-media-expands-worldwide-and-acorss-multiple-platorms