Commodities prices have been on a rollercoaster ride (Shutterstock).

The commodity sector remains under pressure from a whole host of negative developments. In early June, the weakness spread from industrial metals – already suffering from China’s zero-Covid policy and continued lockdowns – to all other sectors. The trigger was the stronger than expected inflation print, forcing the FOMC to respond with a 75-basis point rate hike – a move that subsequently led to an increased focus on recession (a word that now features in most market related updates).

In addition, the general reduction in risk appetite amid challenging market conditions have seen the dollar strengthen to levels not realised in decades – most notably against the euro and Japanese yen. A stronger dollar raises the cost of dollar-denominated commodities, thereby adding additional pressures on demand in regions like Europe already struggling with punitive gas and power prices.

China, the world’s biggest consumer of most commodities, continues to struggle with mounting Covid-19 cases, and a challenged property sector. This continues to delay a recovery, especially for industrial metals which have slumped by one-third since hitting a record peak in early March. The challenge to the Chinese economy was highlighted by the 0.4% year-in-year drop in real GDP during the second quarter. While pockets of strength remain due to tight market conditions, the exit from the sector by speculators and the selling from macroeconomic-focused funds may continue to apply downward pressure until the dollar stabilises and inflation begins to retreat, thereby easing the pressure on central banks to maintain their current aggressive monetary tightening stance. 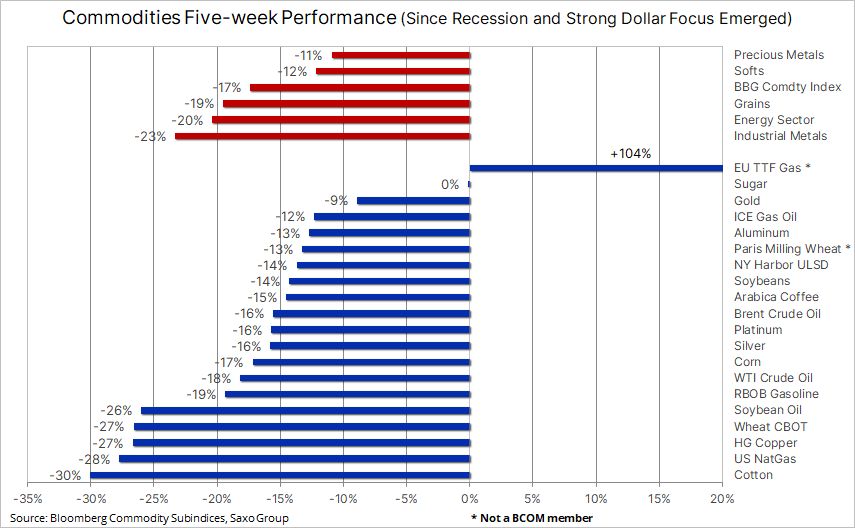 Inflation being at a multi-decade high, and how central banks try to bring it under control, remains the key focus across markets. While input costs have started to ease through lower commodity prices, the worry persists that central banks’ attempts to force down economic activity by tightening monetary conditions may lead to an economic downturn that could trigger a recession. Currently, the main focus is on Europe, where punitively high gas prices are hurting activity, as well as the U.S., where another shockingly high inflation print at 9.1% for June will likely trigger another 0.75% rate hike when the FOMC meets on July 27.

Since hitting a record high in early June before the US rate hike driving a recession focus and dollar strength, the Bloomberg Commodity Spot Index had suffered five consecutive weeks of losses. This brought the total slump to 17%, with all sectors suffering deep corrections. This was led by industrial metals (-23%), energy (-20%) and grains (-19%). Precious metals have not escaped the rout with silver down 16% and gold 9% during this time.

Crude oil (Brent) continues to trade around $100 per barrel after briefly dipping below key support at $97.5 per barrel – the equivalent in WTI being $93.50. Overall, the market has all but surrendered the gains seen in the wake of Russia’s invasion of Ukraine, with the attention instead turning to the risk of an economic slowdown hurting demand. This would help reduce the tightness that in recent months propelled prices sharply upwards. President Biden’s visit to Saudi Arabia is unlikely to yield much in terms of additional barrels, not least considering the latest price drop. In the short term, the market will continue to focus on the dollar and Covid-19 outbreaks in China, with the latter resulting in Chinese growth slumping to its lowest since the Wuhan outbreak in early 2020. 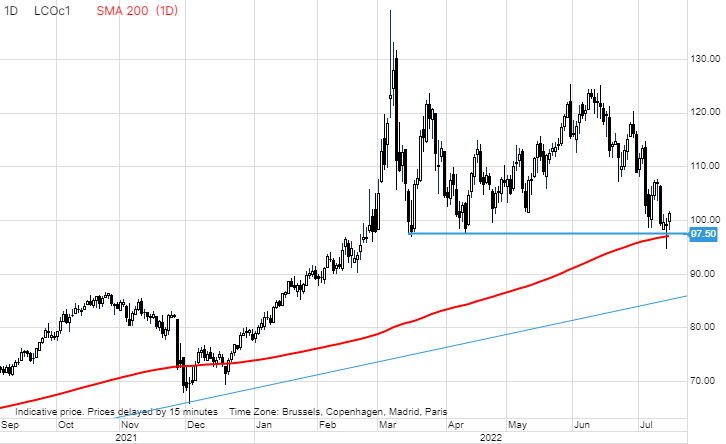 Questions are now being raised about the energy sector’s ability to withstand additional recession-focused selling. We still believe – and fear – that worries about demand destruction will be more than offset by supply constraints. Russia’s ability to maintain its current production levels will be increasingly challenged over the coming months. In addition, we are seeing several OPEC+ members close to being maxed out, with only a few oil providers still being able to raise production.

In the short term, we will see a continued battle between macroeconomic-focused traders selling “paper” oil, through futures and other financial products as a hedge against recession, and the physical market where price supportive tightness remains – most notably in Brent where buyers of physical barrels are paying a near record premium for immediate delivery. In addition, the US will eventually have to stop pumping close to a million barrels per day into the market from its strategic reserves. On that basis, we see Brent crude oil trading not far from support. However, in response to the current recession focus, we lower our Q3 target range to $95 to $115.

Industrial metals: Copper was heading for its steepest weekly decline since early 2020 with the combination of an increasingly challenged Chinese property sector and a global economic slowdown forcing a major adjustment to the short-and-medium-term price outlook for the metal. The Rio Tinto Group, a major supplier and the world’s second largest mining company, warned about the prospects for the global economy in a quarterly update, pointing to war, inflation and tighter monetary policy.

From a technical perspective, the price of High-Grade Copper has, during the past three weeks, cratered non-stop since breaking key support around $3.95. In the process, it has corrected by a massive 61.8% of the $3/lb surge from the 2020 pandemic low to the record high on March 11 this year. Responding to these developments, hedge funds now hold a net short of 26k lots – still well above the 68k lots short held in the aftermath of the pandemic-led slump in early 2020.

A break below $3.14/lb may signal a complete reversal of the uptrend and a return to the pre-pandemic trading range between $2.5 and $3.0. In order to avoid a downward extension of this magnitude, the recessionary pressures and the dollars’ advance both need to slow. 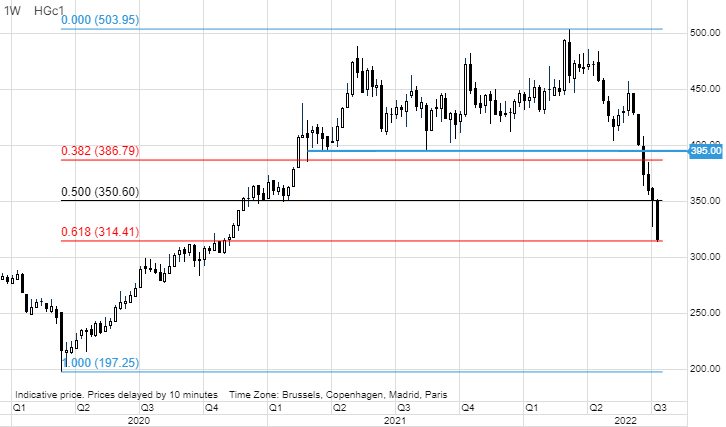 Precious metals: Gold, just like copper, is heading for its fifth weekly loss – the longest streak in almost four years. During this time, it has slumped by 9%. The main drivers for this are the much stronger dollar, a sharp drop in US 10-year inflation expectations driving up real yields and not least a major headwind from silver, which has behaved increasingly like an under-pressure industrial metal.

For gold to find fresh support, some of these recent headwinds – most importantly the dollar – need to reverse. We view gold’s recent weakness as overdone as the threat of stagflation has not gone away. However, we also respect the market’s ability to create pain, not least during the liquidity-thin holiday months where momentum in either direction is often allowed to run with limited appetite to oppose the prevailing trend. As a result, we have seen a sharp reduction in exposure held by investors in ETFs (Exchange Traded Funds) and speculators in futures. The latter group have cut bullish bets to a three-year low.

Having challenged $1700 for the first time since a brief visit last August, a break below will put $1675 within reach – a level that has provided support on several occasions during the past two years. Meanwhile, silver is down 40% to an 18-dollar handle from the 2021 peak around $30 after slicing through several layers of support. In the process, speculators have switch positions back to the largest net short in more than three years. At this stage, a sentiment change will be needed to prevent further losses and for buyers to return to challenge the mentioned short position. 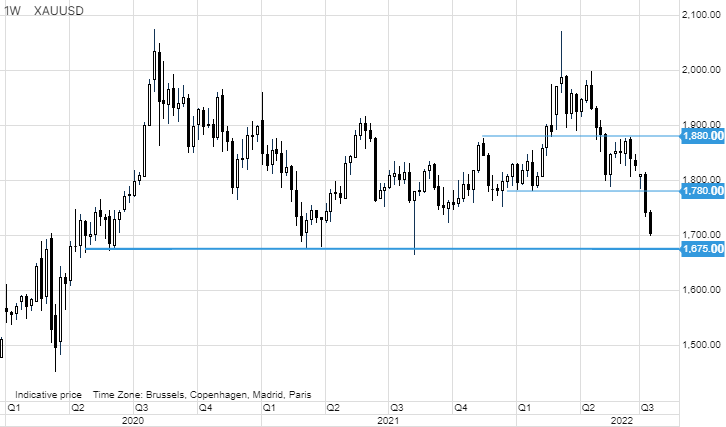 European gas prices have more than doubled since early June with Dutch TTF (Title Transfer Facility) benchmark gas futures trading around €170/MWh or $50/MMBtu. Russia has increasingly been weaponising its gas supplies to Europe in retaliation against sanctions and the region’s support for Ukraine through military aid. While a short-term disruption from Norway earlier this week drove prices to €187/MWh, the focus remains on the Nord Steam 1 pipeline – currently shut down for maintenance. The pipeline – which is the main supply channel for gas to the European Union, especially Germany – was already operating at 40% capacity before the shutdown. This added to an energy crunch which is hurting industries while raising concerns about winter supplies. The main concern is whether Gazprom will keep the line shut even after maintenance finishes next week. If so, it will seriously challenge Europe’s efforts to rebuild its inventory levels ahead of the peak winter demand season.

Record high gas prices driving up the cost of heating and electricity are one of the reasons why EURUSD has reached parity for the first time in 22 years. As a result, we are currently seeing a high correlation between Russian gas flows to Europe and the euro. In other words, next week's decision by Gazprom/Russia on Nord Stream 1 shipments may trigger additional weakness or potentially, together with an expected ECB (European Central Bank) rate hike, help create a floor under the common currency. 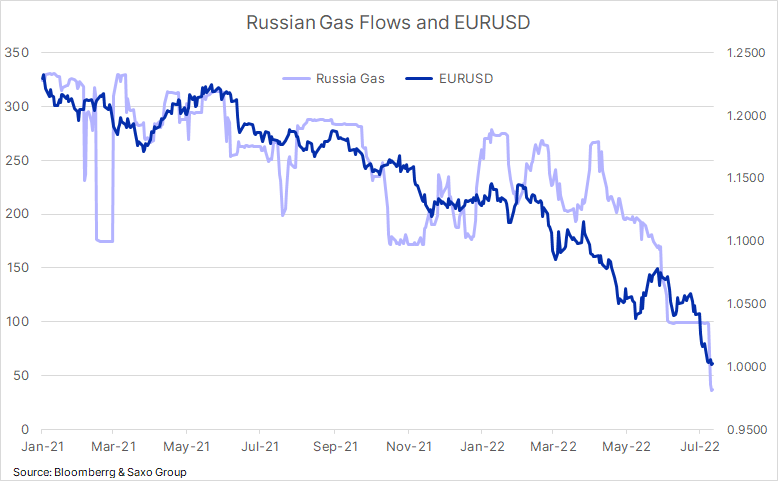 Agriculture: A combination of dollar strength, emerging supply from recently harvested winter crops, a forecast for strong wheat production in Russia and Australia and a plunge in investor sentiment towards commodities in general, have seen the Bloomberg Grains index return to flat on the year – giving back all the post-invasion gains. The bulk of the weakness has been seen during the five-week window since recessionary fears and the stronger dollar emerged following the June US CPI print and subsequent FOMC rate hike.

Speculators, sensing a market running out of steam, began cutting back exposure across the six major grain and soybeans contracts in late April. This came after the total length exceeded 800k lots – a level that on three previous occasions during the past decade had led to a sharp reversal in prices and positions. As of July 5, that length had been cut to 391k lots. However, with production uncertainties in the US and especially Europe caused by the current heatwave, we doubt that prices have much further to fall until we get more clarity on production levels.

Talks held this week in Turkey between Russia, Ukraine and the UN over unblocking millions of tons of Ukraine’s grain exports has been described as constructive and, if successful, it would further reduce the risk of a food crisis over the coming months. Ukraine, a major exporter of high-quality wheat, corn and sunflower oil has seen its main export artery through the Black Sea blocked since March. This helped send wheat and edible oils sharply higher before a level of calm was restored in the early weeks of the war.

Peak recession fears bring commodities down to earth
Insight by Ole Hansen, Head of Commodity Strategy at Saxo Bank.   The commodity sector remains under pressure from a whole host of..
https://salaamgateway.com/story/peak-recession-fears-bring-commodities-down-to-earth