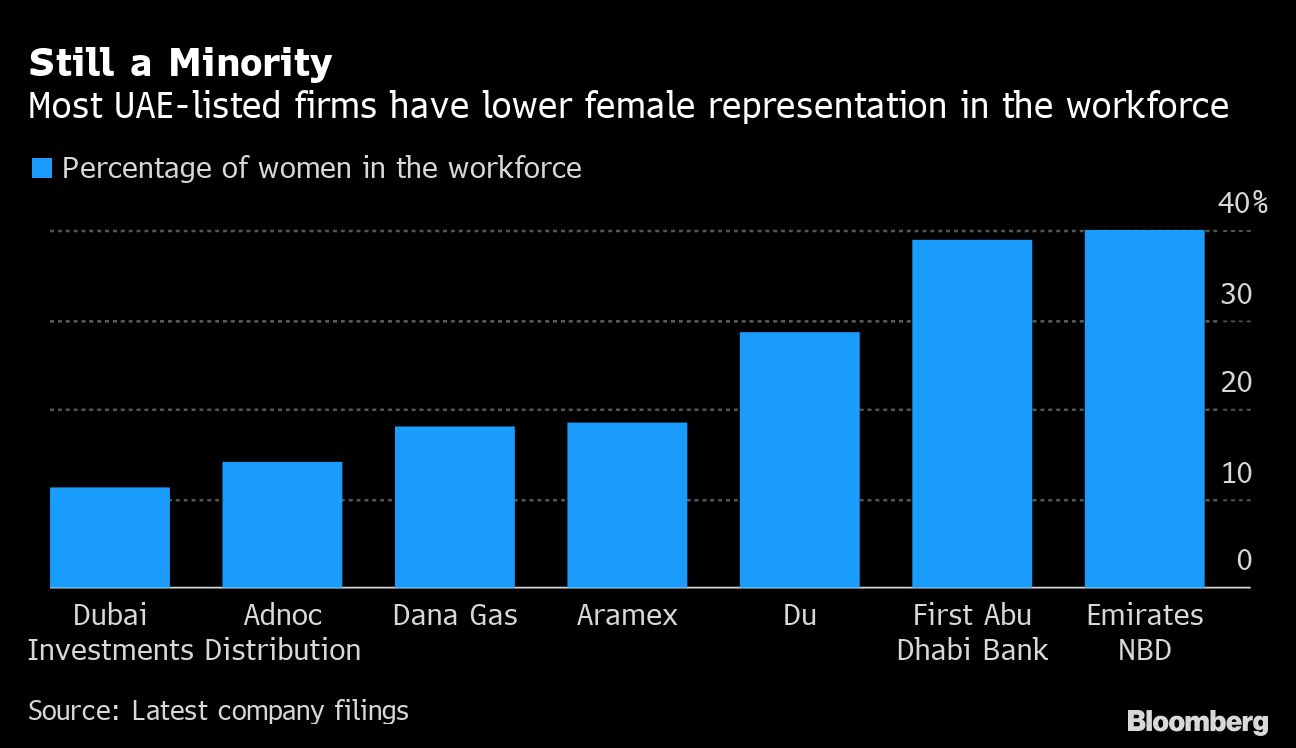 Published 18 May,2021 via Bloomberg Technology & Innovation - Getting more women on corporate boards in the United Arab Emirates was never going to be easy, and the numbers after a new rule went into effect to boost their presence bears that out.

Since the country announced on March 15 that listed companies should have at least one female board member, only four of the 23 people added to such roles at firms on the UAE’s two major stock exchanges have been women, according to data compiled by Bloomberg. That barely moves the needle in a country where about 96% of such positions are held by men.

For Fatma Hussain, the only female on the board of Dubai-based logistics group Aramex PJSC, the sluggish progress is evidence of a cultural mindset that keeps women away from such roles. Women -- especially from conservative backgrounds -- shun posts that may require staying out late or interacting with male colleagues, said the UAE national, who’s also the chief human capital officer at TECOM Group, a unit of sovereign investment vehicle Dubai Holding.

“I interview a lot of people, and sometimes a female candidate has to ask permission from her parents to take on an offer because there are many males,” said Hussain, who joined Aramex’s board after the post was advertised in a local newspaper.

The social context poses an uphill battle for gender equality even as Emirati women make up 70% of all university graduates. While women constitute around two thirds of public sector workers, only 30% are in leadership positions, according to data from the UAE’s Gender Balance Council. A report by JPMorgan Chase & Co. last year showed no “clean data” for the UAE’s female employment but estimated that their workforce participation fares poorly even when compared with neighbors like Saudi Arabia, Kuwait and Qatar.

That’s the backdrop for the UAE’s board push, with threats of penalties for companies that don’t comply. An unprecedented step for the Middle East, it comes as the oil-rich Gulf region -- long dependent on crude to carry its trillion-dollar economy -- looks to diversify the pools of talent it taps as global hydrocarbon reliance ebbs. The World Bank estimates that the Middle East North Africa region’s female labor force participation rate is the lowest in the world.

The UAE wants to show it is serious about its new rule. The Securities and Commodities Authority told Bloomberg in a written response to questions that penalties for companies that don’t comply may range from warnings to a fine, or even a referral to public prosecution. Companies will be asked to disclose board representation in annual reports, an SCA spokesperson said.

Gender quotas have proved successful in other parts of the world. In France, for instance, women occupy at least 40% of board positions at large companies, a direct consequence of a law passed in 2011 where a gradual quota was imposed to increase women’s participation from 20% in 2014 to 40% in 2017. Germany, which has had a poor record for female corporate leadership, this year presented a bill requiring at least one woman on management boards of listed companies.

The SCA move was “truly necessary,” said Racha Alkhawaja, Dubai-based group chief distribution and development officer at Equitativa Group. “Women have made a huge leap in the corporate world in the past decade but their visibility has not necessarily caught up and hence not many have attained board level yet.”

The mentality that places women in the primary caregiver box “needs to shift,” she said. “Until that happens, equality won’t be achieved. Changing mindsets takes generations.”

Cultural barriers are less of a limitation than they used to be, said Mohamad Hamade, chief executive officer of Amanat Holdings PJSC, which appointed two women to its board even before the new rule.

“I’ve witnessed the evolution over the past 10 years and it has become significantly more diverse,” he said. “I don’t think it will be challenging to identify qualified women. There are a lot of great achievers out there who have accomplished a lot, be it locally or regionally or even internationally, and can add a lot of value to publicly listed companies.”

Still, “the reality is that we are starting at quite a low base,” said Diana Wilde, co-founder of Aurora50, a UAE-based social enterprise focused on creating gender-balanced boardrooms. Compared with the U.S., where there is at least one woman on every board of the S&P 500, or the U.K. where more than 34% of board positions on the FTSE 350 are held by women, “it is quite low,” she said.