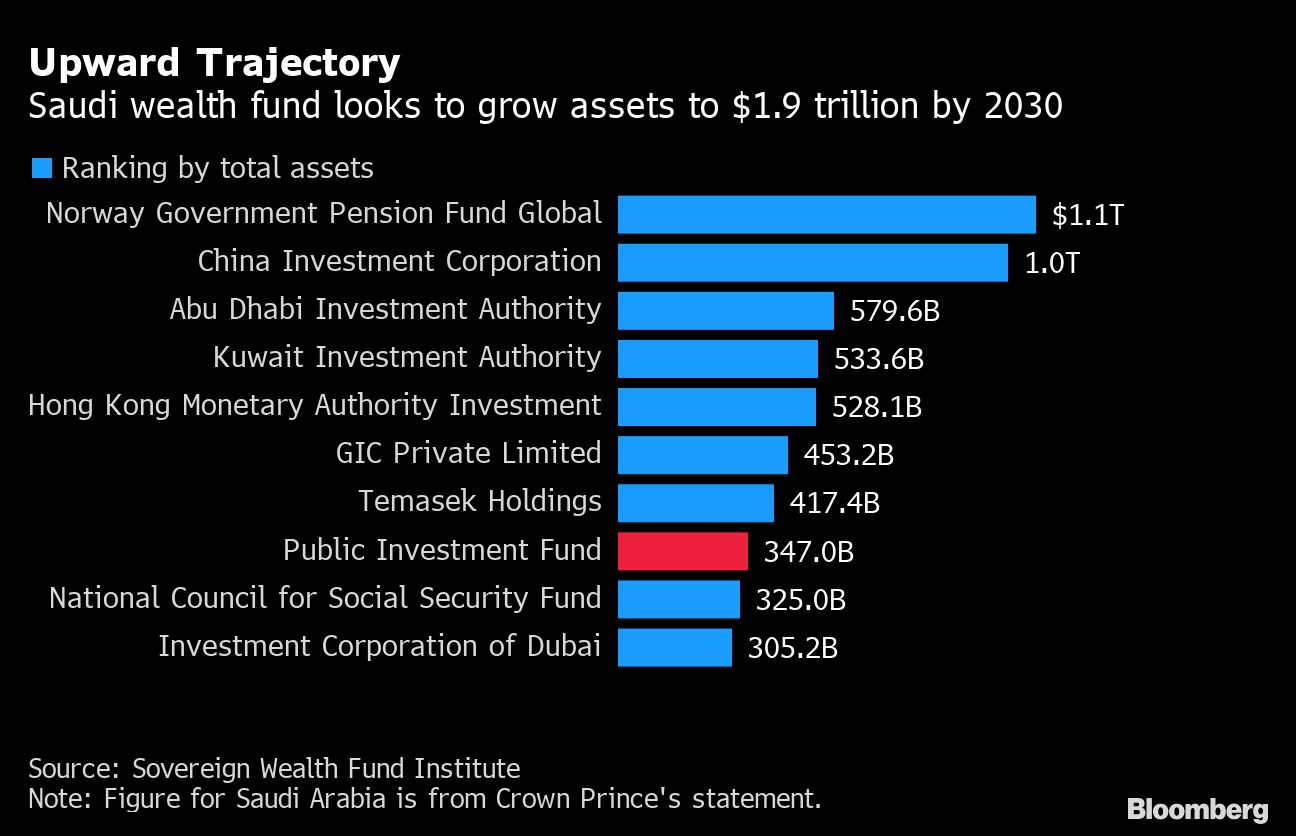 Handed $40 billion earlier this year to buy global stocks, the Public Investment Fund will plow the same amount into the domestic economy next year and again in 2022. Some of the local investments could be funded by liquidating existing assets, Crown Prince Mohammed bin Salman said in a rare statement last week.

The $347 billion sovereign investor is a key lever for the kingdom’s de facto ruler to revive growth and get his economic master plan, known as Vision 2030, back on track after what may be the deepest recession the world’s largest crude exporter has experienced since 1987. The PIF declined to provide further details on the planned investments.

The fund intends to play a leading role in refocusing the economy toward underdeveloped industries like tourism and diversifying away from oil. The amount it’s set to invest is equivalent to more than 10% of government expenditure in 2021 -- and nearly equal to what the PIF, chaired by the crown prince, spent locally in the previous two years combined.

“The crown prince needs the PIF to deliver on its main raison d’etre, which is making Vision 2030 a success -- a personal and national interest for him,” said Rachna Uppal, director of research at Middle East-focused consultancy Azure Strategy.

Under the leadership of Yasir Al-Rumayyan, a close adviser to the crown prince, the fund has shifted investment priorities over the past five years away from holdings in state-owned companies to building up stakes in Uber Technologies Inc. and Jio Platforms Ltd., the digital services business controlled by Indian billionaire Mukesh Ambani.

It also spent billions of dollars buying shares in companies including Facebook Inc., Citigroup Inc., and Walt Disney Co. in March at the height of the pandemic-driven sell-off. As markets rebounded, it largely exited those positions and bought into exchange-traded funds focused on utilities and materials sectors.

That helped boost returns to 7%, Prince Mohammed said, with some of its investments yielding 140%. While most sovereign funds in the Middle East don’t publish their returns, Abu Dhabi Investment Authority said its 20-year annualized rate of return was 5.4% in 2018, according to its most recent report.

Although the PIF was expected to play a significant role in Saudi Arabia, this is the first disclosure about how much it’s set to pump into the local economy. It comes as the Saudi government embarks on three years of spending cutbacks to bring the budget deficit to near zero by 2023.

Investment bank EFG Hermes has estimated that the PIF was planning some $542 billion of projects during the coming two decades, accounting for around 60% of the total in Saudi Arabia. It’s a program dominated by a planned high-tech city Neom, to be built from scratch on the Red Sea coast.

“The progress of PIF’s project list has been, so far, quite gradual,” said Mohamed Abu Basha, head of macroeconomic research at Cairo-based EFG Hermes. “The government is tightening its left pocket and spending with its right pocket.”

The government covered nearly its entire budget deficit with domestic borrowing in the third quarter. Last month, two of Saudi Arabia’s top banks -- in which the PIF is the largest shareholder -- agreed to merge, forming what could be a go-to bank for Vision 2030 projects.

Fitch Ratings, which downgraded its outlook on Saudi Arabia to negative this month, said the PIF’s domestic investment will partly help offset the effect of government austerity. But Fitch also warned over increased borrowing led by Saudi Aramco as well as the PIF and its portfolio companies.

“This will contribute to the erosion of Saudi Arabia’s balance sheet strengths and to a worsening of its overall net external creditor position,” the rating company said.

For more articles like this, please visit us at bloomberg.com

Saudi wealth fund is making another splash but this time at home
..
https://salaamgateway.com/story/saudi-wealth-fund-is-making-another-splash-but-this-time-at-home