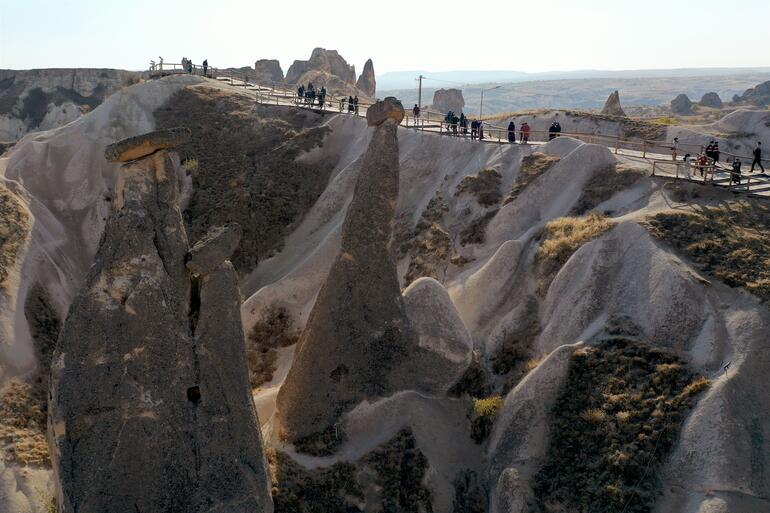 Published 17 Nov,2020 via Hürriyet Daily News - The “Three Beauties” fairy chimneys, one of the symbols of Cappadocia, which offers its guests fabulous views with its natural, historical and cultural richness, is one of the most visited spots in the central Anatolian region.

Consisting of three adjacent fairy chimneys defined as father, mother and child in Cappadocia’s Ürgüp district in the central Anatolian province of Nevşehir, the “Three Beauties” attracts the attention of tourists at all times of the year.

Visitors in the area, which has become a popular destination for domestic and foreign tourists, keep coming throughout the day despite the ongoing COVID-19 pandemic to see the beautify of these amazing natural formations.

Speaking to the state-run Anadolu Agency, Ürgüp Mayor Mehmet Aktürk stated that the recently landscaped area has been visited, especially by those who want to share photos on social media.

Explaining that they created various decorations for photography enthusiasts around the area, where the fairy chimneys called “Three Beauties” are located, Aktürk said: “The ‘Three Beauties,’ one of the symbols of our region, received more visitors before the pandemic. Inspired by the name of the ‘land of beautiful horses,’ we have placed horses here. A new photo shooting has been created called ‘Fairy tale city Ürgüp.’”

Professional tourist guide Gökhan Dinç, who accompanies tourists around the fairy chimneys, stated that in parallel with the increase in the use of social media in recent years, the interest of visitors in the “Three Beauties” location has increased.

Stating that he observed that photos taken by local and foreign guests in the region were shared on the Internet and it contributed positively to tourism, Dinç said: “Cappadocia is the center of cultural heritage as well as natural beauties. It is one of the most visited places in Turkey and one of the world’s rare points on the UNESCO World Heritage List.”

“The ‘Three Beauties’ is a visually predominant place depicted as father, mother and child, created by volcanic formations in the form of fairy chimneys. Videos and photos shared on social media today attract more tourists to the region,” he added.