Photo for illustrative purposes only. The meat section at a supermarket in Marilia, Sao Paulo, Brazil, on April 19, 2019. Alf Robeiro/Shutterstock

The Arab-Brazilian Chamber of Commerce is close to completing a blockchain project that aims to enhance traceability and increase trust in the country’s halal food supply chain.

The platform aims to provide a reference for the Muslim world when they want more information about Brazil’s halal producers or when they want to connect with these companies, Tamer Mansour, secretary general of the Arab Brazilian Chamber of Commerce told Salaam Gateway.

It will also verify the authenticity of a manufacturer’s halal certificate to ensure that producers are complying with halal standards and help guarantee the final product for importers.

“We will first implement the blockchain system inside halal meat processing plants, to track the supply chain from the farm until shipment. We will involve two entities– the Ministry of Agriculture as the entity that issues health certificates as well as halal food [certifying] centres. After that, we will invite some logistics companies to be part of the project,” said Mansour.

The ultimate goal is to increase confidence in Brazil’s halal produce and supply chain, which along with the country’s meat industry took a beating in 2017 following the revelation of corruption in the “Operation Weak Flesh” probe.

“We want customers to have our application so that they can see the whole procedure from farm to table on their smartphones. We are not concerned about payment terms, only about the guarantee of the halal product,” said Mansour.

IBM is developing the blockchain system under a contract that was signed with the chamber in December 2019.

The project is self-funded by the chamber and is currently in the testing phase. It is expected to be launched in two months.

Blockchain can enable more transparent and accurate end-to-end tracking in supply chains. Physical assets, such as livestock, can be digitized and put on a decentralized record of all transactions, including certifications such as for halal slaughter. Putting a supply chain on a blockchain also makes it possible to track assets related to logistics such as shipment and storage. 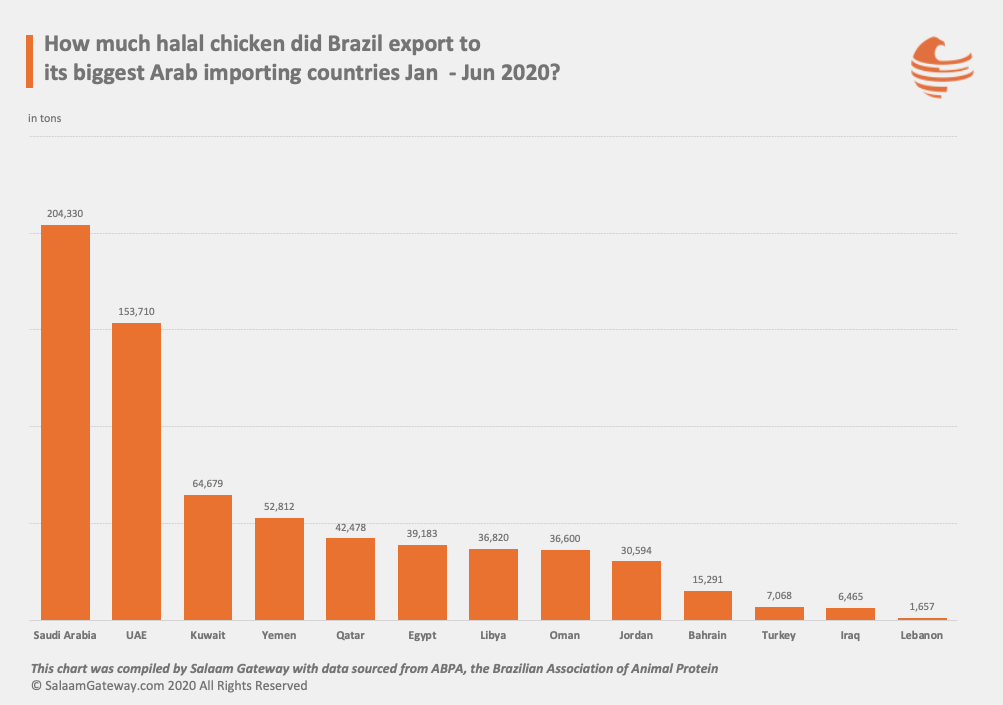 Chart: Halal chicken makes up around 40% of Brazil’s chicken exports, according to the Brazilian Association of Animal Protein. The country exported 922,200 tons of halal chicken to Arab countries during the first half of 2020.

Brazil is the world's largest exporter of halal meat, with China, Hong Kong, Saudi Arabia, and the UAE being the biggest buyers.

However, the absence of a standardized halal certification among Islamic economies, the vast physical distance between Brazil and Muslim countries, as well as language barriers, are all challenges for the Latin American country’s meat producers and exporters.

According to Mansour, Brazilian halal food exporters shipping products to Muslim countries, such as Egypt, Malaysia, Indonesia, and the Arab countries of the Gulf, have to deal with many different certification standards. Halal certification needs to be standardized for all Islamic countries that import meat from Brazil in order to facilitate compliance, he said.

“Brazil being a non-Muslim country, we need to help Brazilian businesses to grasp the relevance of halal, its added value, and the simplest way to do it would be to make certification rules consistent across the board. The most important thing when it comes to end products is that the entire production chain be halal. That is what we are espousing in order to improve halal in Brazil,” he said.

Brazil’s food exports to Organisation of Islamic Cooperation (OIC) countries are estimated at $5.5 billion, according to the State of the Global Islamic Economy 2019/20 report from DinarStandard, the parent company of Salaam Gateway.

“Brazil is a continent-country and can help a lot not only in the supply of halal food but also in terms of food security. As a large producer, it should participate in the conversation and contribute with its technology, whether in irrigation or food production.”

Shipping halal food from Brazil to the Arab world is another challenge due to the long distance between the two regions and the absence of direct shipping routes.

“We don’t have a direct shipment line linking Brazil with Arab countries. Emirates has direct flights between Dubai and Sao Paolo, but it would be very expensive to transport goods by air. You cannot compare maritime with air freight,” noted Mansour.

He said a potential solution would be to set up transportation hubs for Brazilian products in the Middle East and Far East. In the Arab world, port cities like Alexandria, Rabat, and Dubai enjoy strategic locations and can serve as manufacturers with added value and re-exporters.

For example, Brazil can export raw material such as chicken, and the importing hub would produce added value products, such as chicken burgers or nuggets, and re-export them.

“What I suggest is to have partnerships with Arab countries and businesses that have knowledge on how to add value to products. We can use port cities as hubs, where we would send our raw material products and manufacture them there as well as re-export them with two halal logos.”

“When you are producing your halal product in a Muslim country, it will be easier for other Muslim and non-Muslim countries that have large Muslim populations, such as South Africa, to trust Brazilian halal products,” said Mansour.

He noted that cities like Alexandria, Rabat, and Dubai, benefit from having Free Trade Agreements (FTAs) with countries with which Brazil doesn’t have such agreements.

“For example, Brazil has an FTA with Egypt, and Egypt has an FTA with European and African countries, so if we ship our raw materials to Alexandria and open a processing plant together with Egyptian manufacturers, we can easily export our products to Africa and Europe.”

In the case of Dubai, setting up a factory in Jebel Ali or any other free zone and re-exporting Brazilian halal products from there to countries such as China, Malaysia, Singapore or Pakistan, would facilitate the entry of those products because of the easier logistics, the cheaper transportation, the available know-how, and the fact that the UAE is a Muslim country.

As a member of the Union of Arab Chambers, the Arab-Brazilian Chamber of Commerce is recognized as the Brazilian representative of the Arab League’s business interests – an institution that brings together the 22 countries that adopt Arabic as an official language.

As part of its work, the chamber regularly promotes Brazilian halal meat companies by participating in major food exhibitions such as Gulfood in Dubai, SIAL Paris, and Anuga Food Fair in Germany, and through partnerships with entities such as the International Halal Accreditation Forum.

Founded in 1952, the Arab Brazilian Chamber opened its first office outside Brazil in Dubai in February 2019, a strategic move given that the UAE is Brazil’s third-largest Arab trade partner.

“We started preparing our 10-year strategic plan at the end of 2019 with the consultancy Ernst & Young. One of the missions of this plan is to internationalise the chamber and bring it closer to the Arab world,” said Mansour.

“Our Dubai office has become a gateway for us to the world and we have been connecting with different companies. We participate in Gulfood every year, and in 2019, we broke a record in the number of participants with 120 Brazilian companies. We will open two more offices in the region, in Riyadh and in Cairo. We even decided on the exact locations, but the coronavirus pandemic has delayed the process.”

Additionally, the chamber signed an agreement in June with the Dubai Airport Freezone Authority’s (DAFZA) Halal Trade and Marketing Centre (HTMC) to become a key contributor to the centre’s support services. The alliance is expected to boost trade and investment flows between the UAE and Brazil.

Commenting on China’s recent decision to block exports from six meat-processing plants in Brazil over COVID-19 concerns, Mansour said it was a political move and had to do with the way China handles things.

“We are confident of our procedures and production processes; there is no proof that the meat was contaminated inside the slaughterhouses or during transportation or even at the ports in China or Hong Kong,” said Mansour.

He admitted that Brazil’s halal meat industry is suffering during the COVID-19 crisis because of the strict protocols it had to enforce to control outbreaks inside meat processing plants.

As the country's number of COVID-19 cases continues to rise, with 3,862,311 confirmed on August 30, Mansour said it is unlikely that anyone will travel outside the country before a vaccine is developed.

He noted that digital communication is working well and making people more comfortable. In the coming months, the chamber will promote more virtual B2B meetings with Arab countries and may virtually host the Brazil & Arab Countries Economic Forum, which was originally scheduled for April but has been postponed.

“Our objective is to promote more dialogue around what the future will be, because before the pandemic, we were having conversations around sustainability, the digital economy, and food security. These topics are still important, but we want to talk more about the aspect of being a human being.”

“People are very sensitive now; they want to negotiate and do business, but they want to be human, so we need to think about how we are going to balance those elements.”