The TiNDLE chicken shawarma and the Impossible Burger. Photos supplied by TiNDLE and Impossible Foods.

Plant-based meat producers TiNDLE, Impossible land in the UAE in time for Expo2020

Vegan ingredients are by their nature halal but plant-based meat producers are increasingly choosing to get halal certification as a way to gain Muslim consumer confidence.

DUBAI - Competition in the United Arab Emirates’ plant-based meat market is heating up. Singapore's Next Gen Foods debuted its plant-based chicken brand TiNDLE earlier in September, while California-based Impossible Foods plans to launch its Impossible Burger at the Dubai World Expo when it opens on October 1.

Impossible’s announcement comes after rival Future Farms launched its Future Chick’n in June. The Brazilian start-up entered the UAE in October last year, and claims more than 30 percent of the market share within the vegetarian corner in Carrefour, the region’s biggest hypermarket chain, overtaking competitors such as Beyond Meat.

Impossible Burger is arriving in the UAE almost five years after its launch in the U.S. and will be featured on menus at Expo 2020’s U.S. Pavilion, the company announced on Tuesday (September 28).

The company hopes to showcase its flagship product to the millions of visitors who are anticipated to arrive at the mega-event over the next six months.

But it won’t be the only vegan option there. Several plant-based eateries are setting up at Expo’s Sustainability Pavilion, including a three-storey vegan dining complex led by celebrity plant-based chef Matthew Kenney, where several meatless dishes will be served.

After making its debut at the World Expo, Impossible Burger will be available at nine restaurants across Dubai.

The plant-based burger will be available for other UAE restaurants to order from early October via Bidfood Middle East, the company’s local distributor.

Impossible Burger and TiNDLE are both taking a gastronomy-first approach to market, rolling out their innovations with culinary experts via foodservice. And for good reason: adding plant-based menu items is profitable for restaurants.

This doesn’t rule out the possibility of launching retail lines. Impossible Burger is already available in thousands of grocery stores across the United States, Canada, Hong Kong, and Singapore, and may extend its products to the UAE’s retail sector.

TiNDLE, which is only available in restaurants for now, will gradually be rolled out to other channels and be present in retail too, Andre Menezes, Co-Founder & CEO of Next Gen told Salaam Gateway.

“Our activities in the next one to two years includes raising Series A funding, product diversification, and international expansion, so direct-to-consumer is a definite possibility,” said Menezes.

Since its global debut in Singapore in March this year, TiNDLE has launched in Hong Kong, Macau and now in the UAE.

Despite starting at the onset of COVID-19, Next Gen succeeded at raising $30 million in funding from Asian and American venture capitalists – the largest initial round ever for a plant-based food start-up, according to the company. The investors included Singapore’s state-owned investment firm Temasek International, and business guru Chris Yeh.

The funds helped Next Gen take TiNDLE to new markets, but it was the industry knowledge that enabled the company to develop the taste and texture of its plant-based chicken.

The company’s co-founder Menezes previously served as general manager at Singapore-based SATS BRF Food, now called Country Foods, where he worked on the processing and distribution of Impossible Foods products.

Next Gen’s other co-founder, Timo Recker, has also been involved in the industry, having founded German plant-based protein start-up LikeMeat in 2013 and served as its CEO until it was acquired by the Livekindly Collective in 2020. Prior to that, he worked in his family’s meat processing business.

“Part of the challenge was understanding what chefs and consumers want from chicken - in taste, texture and cookability. We knew that delivering delicious taste experiences was key to make the consumers forget why animals were ever needed in the first place,” said Menezes.

“Our CTO John Seegers – who has over 25 years of experience in plant-based foods – consulted with professional chefs who provided inputs in TiNDLE’s development process from its taste profile, fiber integrity, but most valuably how the product performs across culinary applications.”

Next Gen’s strategy is based on a digital, asset-light, and global supply chain. As such, the company has managed to develop ingredient sources, and manufacturing and distribution capabilities in multiple countries without travelling out of Singapore.

“The set-up is already running at scale, with a manufacturing facility in Europe and products being shipped to a few countries in APAC and UAE. In line with our global growth plans, we foresee that we will have manufacturing partners minimally in Europe, USA, Brazil, and China,” said Menezes.

In the coming months, Next Gen plans to further expand TiNDLE in APAC, enter the U.S. and Europe, and establish a research and development center in Singapore.

The company also plans to develop a production partnership in the island nation close to its R&D centre, allowing for faster innovation and preferential access to APAC markets, and leveraging Singapore free trade agreements.

In the UAE, TiNDLE faces intense competition from other players in the segment, including Impossible Foods, which launched plant-based chicken nuggets in the U.S. in September 2021, and Future Farm, which entered the UAE market in June 2020 and recently launched its vegan chicken in the country.

The Singaporean start-up will also compete with Beyond Meat, whose products have been available in the UAE since 2018, and which launched plant-based chicken tenders in the U.S. and Canada last July.

Purchase and consumption of plant-based foods is increasing in the Middle East. As an indication, while there are no official statistics on the number of vegans and vegetarians in the Middle East, there are many indicators that they are growing in number.

The number of members on the Vegans Take Dubai Facebook group more than doubled in the last three years, from 3,000 in September 2019 to nearly 6,500 today.

TiNDLE, however, is not only targeting vegans and vegetarians, but also hopes to appeal to chicken lovers in the region with the versatility of its product, which the company claims can take centre stage in nearly any dish, from kebabs to nuggets.

“The Middle East is a key market for TiNDLE given its high consumption of chicken. We are putting our foundations in place to be in the market as we accelerate our goal of becoming the number one plant-based chicken in the region,” said Menezes.

“Investors in the region have started supporting companies that are driving a positive change in our food systems and we already see a lot of interest coming from consumers and chefs.”

Even though vegan ingredients are by their nature halal, plant-based meat producers are increasingly choosing to get halal certification for their products as a way to gain Muslim consumer confidence.

Impossible Foods was the first plant-based meat manufacturer to receive halal certification in 2018. The company’s Impossible Burger has been certified by the Islamic Food and Nutrition Council of America (IFANCA) under regulations set by Malaysia’s Department of Islamic Development (JAKIM).

Beyond Meat has also been certified by Netherlands-based Halal Quality Control, the European administrator of the World Halal Food Council, for 13 of their products, also aligned with JAKIM’s regulations as well as by Indonesia’s authorities.

Similarly, TiNDLE has been certified by the Halal Feed and Food Inspection Authority (HFFIA) in the Netherlands and is produced in a halal-certified factory in the country, while Future Farm’s products meet all FAMBRAS (Federation of Muslims Associations in Brazil) halal requirements and standards.

With start-ups innovating in the meatless ecosystem and with the increasing options available at restaurants and retailers, the future of the region’s plant-based meat market looks bright.

Of the global meatless market of $18.6 billion in 2019, the Middle East and Africa market accounted for $176.5 million and is forecast to grow at an annual rate of 5 percent through 2024 – higher than the global annual rate of 4 percent, according to Euromonitor International. 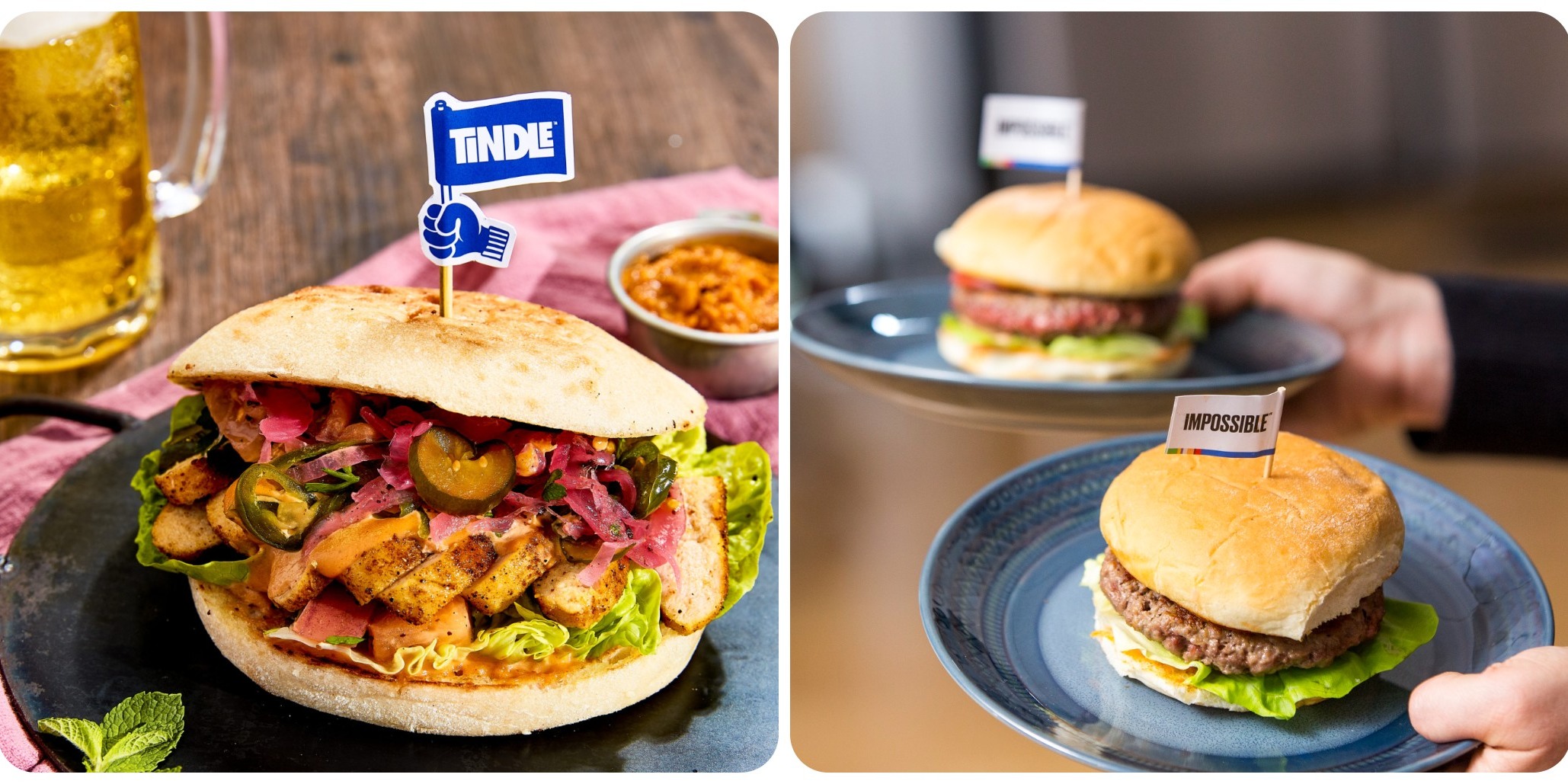